I sometimes wonder what people really think of marriage and what its true purpose is.  Why the institution was ever thought up in the first place.  I don’t think most people get it to be honest.  I think that they think profound love equals marriage.  I don’t agree.  Love and marriage certainly coincide; you wouldn’t marry someone you don’t feel as if you love, but being in love with someone shouldn’t be the basis of your choice to marry.  What is marriage, really? 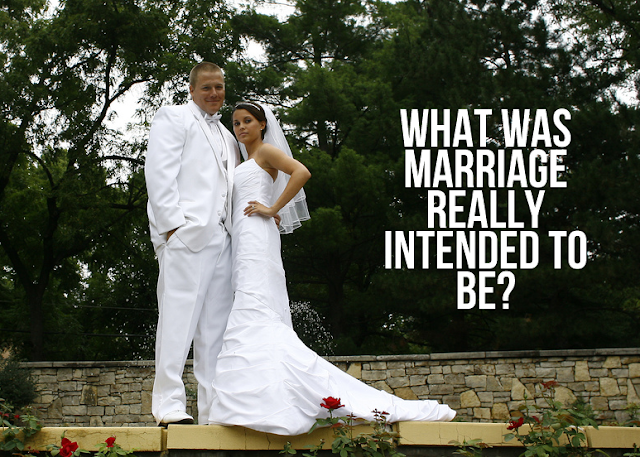 Your definition probably depends on who you are, your culture and your beliefs.  But, what was the real, true intent when marriage was created.  What did that picture look like?

Since marriage itself goes back further than our history books do, we sort of have to take a little from here and a little from there to put together exactly why marriage was invented.  And if we go back even further than that, really, we’ve got to go off what the true creator of everything, God, has to say about it.  After all, marriage is mentioned in the bible a time or two.
God made Adam first, right?  And then he made Eve for Adam.  Genesis 2: 18 says, “The Lord God said, “It is not good for the man to be alone.  I will make a helper suitable for him.”  Man needed a companion; someone to compliment him and walk with him through life.  God decided it wasn’t in his best interest to live life alone.  It would be better with a partner.
And boom, there it is, the true intent of marriage: partnership.
Just like Adam, we all need someone to partner with in life.  To revel in the awesome times and stand with us through all the bad even when it’s ugly.  Especially when it’s ugly.  It’s a commitment to endure this world together.
This brings me back to my all time favorite marriage quote I mentioned a few weeks ago, that essentially says that the first spark of love that you feel for each other is what draws you to the person initially, so indeed those feelings are very important.  But I just think too many people have it wrong.  Those feelings are not meant to last – they serve their purpose and move on.  If you want to live in the “sparks flying” stage forever then you have that right, but you shouldn’t marry.

“Being in love is a good thing, but it is not the best thing. There are many things below it, but there are also things above it. You cannot make it the basis of a whole life. It is a noble feeling, but it is still a feeling. Now no feeling can be relied on to last in its full intensity, or even to last at all. Knowledge can last, principles can last, habits can last but feelings come and go. And in fact, whatever people say, the state called ‘being in love’ usually does not last. If the old fairy-tale ending ‘They lived happily ever after’ is taken to mean ‘They felt for the next fifty years exactly as they felt the day before they were married,’ then it says what probably never was nor ever would be true, and would be highly undesirable if it were. Who could bear to live in that excitement for even five years? What would become of your work, your appetite, your sleep, your friendships? But, of course, ceasing to be ‘in love’ need not mean ceasing to love. Love in this second sense — love as distinct from ‘being in love’ — is not merely a feeling. It is a deep unity, maintained by the will and deliberately strengthened by habit; reinforced by (in Christian marriages) the grace which both partners ask, and receive, from God. They can have this love for each other even at those moments when they do not like each other; as you love yourself even when you do not like yourself. They can retain this love even when each would easily, if they allowed themselves, be ‘in love’ with someone else. ‘Being in love’ first moved them to promise fidelity: this quieter love enables them to keep the promise. it is on this love that the engine of marriage is run: being in love was the explosion that started it.”

Would you agree?  What do you think marriage’s true meaning is?