I had heard so much about floating in a sensory deprivation tank that I’d begun to wonder if I should try it because I love new places and experiences. I’m going to tell you exactly what it’s like, and why I really believe that every mom should try it.

(The short explanation of a sensory deprivation tank is a dark, silent space filled with salt water. I encourage you to keep reading to get the bigger picture because it’s so much more.)

When my husband and I booked our float, I was excited and also crazy nervous. I have obsessive-compulsive disorder, which is an anxiety disorder. That’s a story for another time, but what you need to know about it right now is that it makes lots of things a real struggle for me.

While I had heard that floating in a sensory deprivation tank could be good for people with anxiety and depression, I was truly worried that I might completely freak out. The idea of complete darkness, no sound, and the overwhelming fear that I would fall asleep and drown was a lot. 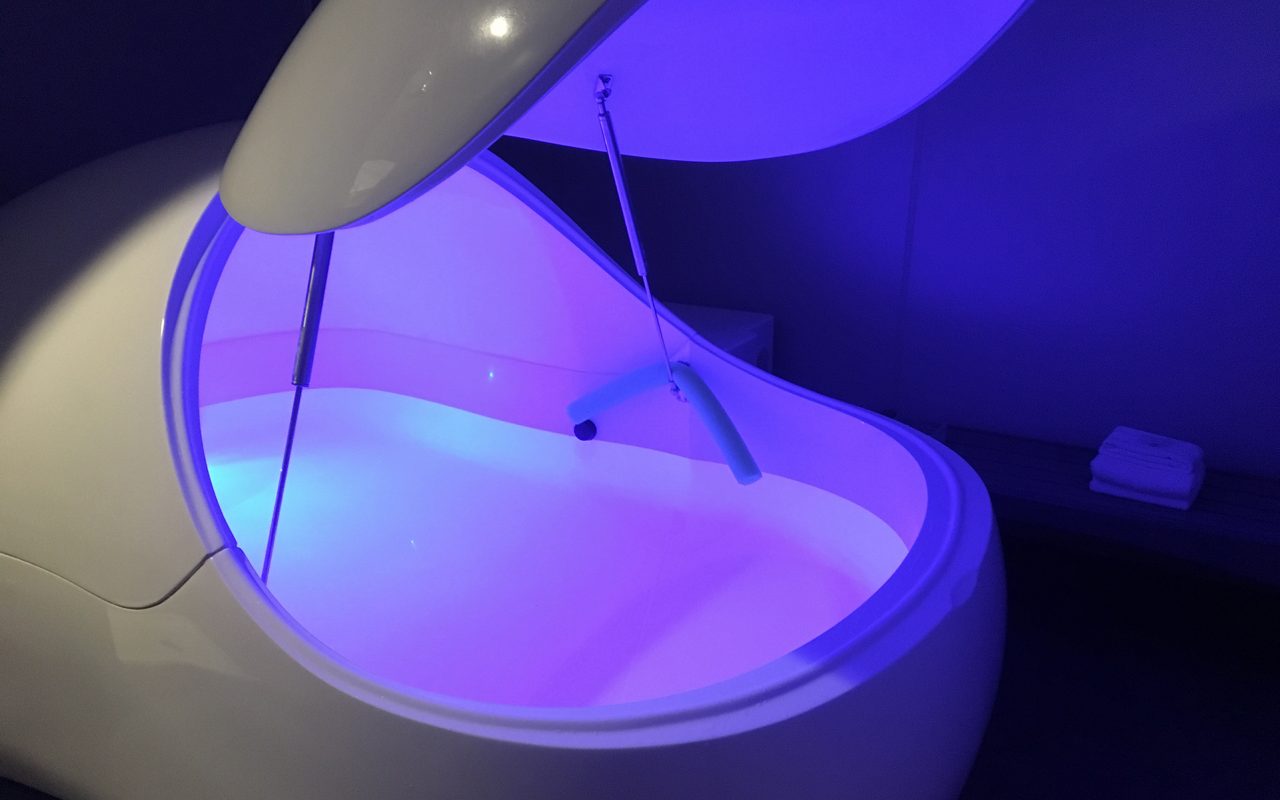 I read everything I could find, but I was still left with questions. I watched YouTube videos and again, I was still not exactly sure what to expect.

Because we’re in the Kansas City area, we found a place to try floating called Floating KC.  I almost pulled the plug because their website is so completely unfortunate. By the looks of it, I was worried I’d show up and it would be in some weird guy’s basement. In other words, it did not instill much confidence that this would be a reputable, clean place to go.

After taking a look at their Facebook reviews, I decided to risk it. I could always walk out if I didn’t feel ok about it.

The Day of the Float

I was anxious all day, but my excitement over the new experience outweighed the noise in my brain.

We were told not to shave the day of the float. I wasn’t exactly sure why, but it became clear later on.

When we arrived, we were checked in by a super nice guy who gave us waivers to sign. My anxiety was sort of yelling in my head, “RUN! RUN! RUN!” I signed anyway.

My husband and I were given iPads to watch a really thorough explanation of what was about to happen. This was such a great idea. It answered most of my questions and helped me become a little bit more at ease.

We were brought to a nice, spa space where we were told to undress and put on white robes and slippers. I was scanning everything looking for the slightest hint of dirt. OCD will do that to you. It passed the test.

Next, we were taken into a dimly lit room where we saw two zero-gravity massage chairs. They were large, black padded things that made me think of something you might see in a Transformer’s movie. Soothing music was playing and as the attendant walked out, we were surrounded by an absolutely beautiful projection of stars and planets on the ceiling and walls.

The chairs and the atmosphere are to ease you into a headspace to prepare for your float.

To say the zero gravity massage chair was wonderful is such an understatement. It moved and tilted us and somehow as if it were magic, it massaged every square inch of my body.

I’m serious. It rubbed my fingers, my back, my neck, my toes. How is that even possible?

It was glorious. If I could afford one of those chairs in my home, I would never leave it. Yep. That incredible.

What It’s Like to Float in a Sensory Deprivation Tank

After the joy that was the zero gravity massage chair, we were taken into the actual float rooms. I was expecting… well I really don’t know what I was expecting. Some kind of coffin thing maybe?

Instead, it was a warm room with a large, fully enclosed tank that looked from the outside very much like an opaque walk-in shower.  Also in the room was a stone shower that was really more of a rain shower. Loved it.

We were told to shower before we got in the tank and that we should put in our foam earplugs afterward. These weren’t needed to block out sound, but rather to keep water out of our ears.

We were given individual containers of petroleum jelly and Q-tips and it was explained that we should coat any cuts or scratches with it. I didn’t think I had any, so I skipped this step.

The guide said once he walked out of the room, we’d have 5 minutes to complete the shower and get in the tank and lie down. At that time, he said, the lights and the super soft music that was playing would gradually go away.

He told us that once everything went dark, we should feel reassured that at any time we could feel the door to our left and push it open if we needed it to. There was no lock.

He left the room and I followed the instructions. When I got in the tank and my hand touched the salt water, I immediately felt a stinging so I got out and covered the spot with the petroleum jelly. NOW I understood why we were told not to shave that day.

Laying down in the tank didn’t feel like I expected. The water was exactly the temperature of a human body and it was almost impossible to tell where I stopped and it began.

Even though it was salt water, that’s not how it felt. I realized it had been ridiculous to worry about drowning because the water, which was super shallow, felt more like laying on top of some sort of warm gel. I can’t imagine there is any scenario in which a person could drown because you literally can’t sink. It hugs your body in a very comforting way.

I was in love.

The tank itself was quite large. I’m 5’4″ and when my arms were spread out I couldn’t touch the sides. My husband is 6’6″ and it was the same for him.

The lights began to dim and the music got quieter and quieter. I found myself in total and complete silence, the likes of which I’d never experienced in my entire life.

The darkness was pure. Not a hint of light. I couldn’t have seen my hand if I’d put it right in front of my face.

My body was weightless. The temperature of the space was such that there was no sense of what part of me was in the water and what wasn’t.

Oddly, I didn’t feel terrified. It felt somehow familiar. I’m not being hyperbolic when I say that it was like a return to a place I’d been before – the womb.

How My Mind Reacted

For the first few minutes, as our guide told us would happen, my mind was running at top speed. It was searching for something to grab onto, something to occupy itself. There was nothing. It was a void.

Soon enough that stopped and I found myself in something akin to a dream. Since there was absolutely no stimuli and I no longer felt connected to my body or the outside world, my mind was free to play.

Solutions to problems began to wash over me, and they were so clear I wondered later on why I couldn’t see them before.

I drifted across time, in a sense. There was nothing to be upset about, and I was awash in gratitude. It was profound.

Softly, slowly the lights and music gradually began to awaken and bring me back to the room. It was very gentle.

I got out, showered again, put on the robe and went back to the spa room where I dressed and dried my hair. I waited for my husband in another room that is there as a buffer between you and the outside world. There was a babbling fountain, music and the light was a soft purple.

When he came out neither of us was ready to talk. We sat quietly for awhile drinking water and letting what had happened sink in.

Why You Should Try Floating in a Sensory Deprivation Tank

Moms are overwhelmed. That’s a short sentence because to name all the things that overwhelm moms would take volumes.

They are always trying to balance not only their lives but the lives of all the other people and relationships in their orbit.

Floating in a sensory deprivation for an hour, I believe, offers a chance like no other to hit the reset button.

It can allow them to rest in a way that they won’t find elsewhere. It’s an hour long retreat that will wholly rejuvenate them so they can return to the business of life and be even better at what they do every day.

In closing, let me say this. You, sweet mom, are worth this. You deserve this. You’ve earned this. But more importantly, you need this. I strongly encourage you to give it a try and if you love it, to budget it for it every month. If you’re on the fence, read other reviews and even talk to your doctor to see what they think. (Mine said it was a great idea.)

As I said before, my experience was with Floating KC. To find a sensory deprivation tank in your area, Google is your friend. Honestly, if I could figure out a way to “float” my way across the country, that would be my new job. 🙂

Have you tried it? Please share your experience with me so readers can have more than just my experience to draw from. Can’t wait to hear your thoughts.

Read next: 22 Phrases to Calm a Worried Kid 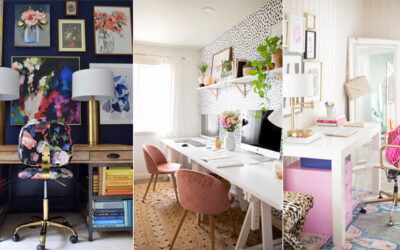 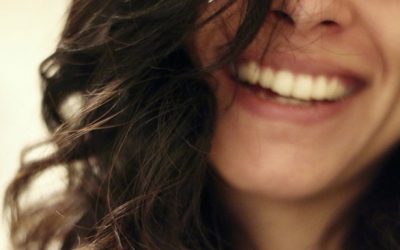 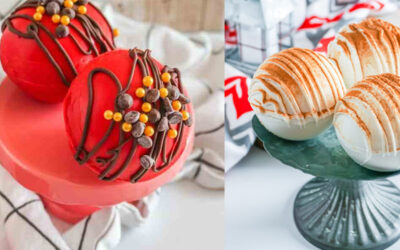 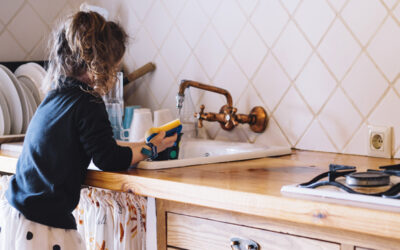