Pokémon Go is so popular it’s about to surpass Twitter in daily users. If your kids haven’t started begging you to download it for them, prep yourself because they’re going to. So that you know what you’re getting into and can make an informed decision as to whether or not you’ll allow them to use it, let’s get you up to speed on all things Pokémon Go.

What is Pokémon Go ?

Pokémon Go is an augmented reality app. When your kids open the app they’ll create an avatar (called a Trainer) and go in search of Pokémon characters in the real world. Think of it this way: when you’re looking around outdoors you can’t see the Pokémon. But, when your kids are looking at the same scene through the screen on their phone, they can see Pokémon characters around them so they can capture them.

As the kids move around they’ll feel a vibration when they are near a Pokémon. Once they see it they’ll aim at it and using their touchscreen, they’ll throw a Poké Ball to catch it. Sometimes they’ll get it and sometimes it’ll run away.

There are also PokéStops which are located at interesting places like monuments, historical markers, etc. “Lures” attract the characters for about 30 minutes. Other players will also see the lures and head to the location. (See the warning below.)

Your child will be asked to join a Pokémon Gym at some point, which means they’ll join with other players in battles to take control of the Gyms. 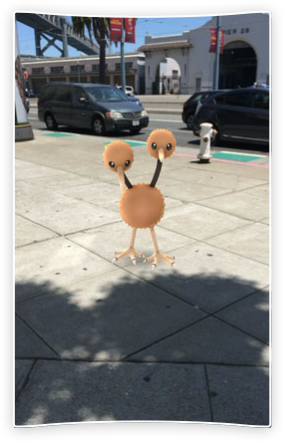 Sound completely confusing? Trust me, your kids won’t find it as insanely baffling as you do, and once you’ve seen them play you’ll get it.

Just like any other app you allow your kids to download, you need to know the the downside.

The biggest fear as far as I’m concerned is that your kids have an app that’s going to encourage them to wander down roads, near water, across the street, etc. Supervision every time your kids play is absolutely imperative. It’s worrisome that some parents will let their kids play the game never understanding just how dangerous it can be. Kids will be kids and they’re going to chase down those characters no matter where it takes them. An adult should always be there making sure their search for Pokémon characters doesn’t get them hurt.

There are already lots of injuries and accidents being reported that are caused by playing Pokémon Go. Instead of paying attention to their surroundings, kids and adults alike are focused on their screen and are walking into things, falling down and just in general getting hurt. It’s up to you to keep your kiddos safe.

Criminals are already using PokéStops to their advantage. They use “lures,” lie in wait for players to show up and rob them… or worse. “Using the geolocation feature of the ‘Pokemon Go’ app the robbers were able to anticipate the location and level of seclusion of unwitting victims,” officials in Missouri said after an armed robbery there.

Use common sense and stay away from PokéStops that are not well populated, well lit, and safe.

Pokémon Go is not a children’s game, although kids are definitely playing it. People of all ages of playing, so don’t be lulled into believing it’s just a bunch of 10 year old kids. Where there are adults and kids, there is the potential for scary interaction.

Pokémon Go is a free app, but there are in-app purchases. Be ware so that your kids don’t run up a huge bill while they’re having fun. As of this writing the costs of in-app purchases range from $1.49 to $159.99.

Pokémon Gyms are being created at people’s houses, in people’s yards, in police stations, public buildings, and more. Some folks have reported everything from cars blocking their drives to strangers hanging out in their backyards.

Pokémon Go can mean a lot of fun for your family if it’s something you do together. It’s a new world we live in so establishing smart rules about these kinds of games now is important as they’re certainly not going anywhere.